The stock market is hitting record highs is it disconnected from the real economy?

By Thomas Huckabee
Posted September 2, 2020
In macroeconomics
The stock market is hitting record highs is it disconnected from the real economy?2020-09-022020-09-18https://tehcpa.net/wp-content/uploads/2015/12/THinc_LogoV8.pngTHInchttp://wpdev.tehcpa.net/wp-content/uploads/2020/09/the-stock-market-is-hitting-record-highs-but-how-is-the-real-economy-performing.png200px200px

On August 20th, The Nobel-winning economist Paul Krugman published a scathing New York Times Op-ED article titled “Stocks Are Soaring. So Is Misery,” which broke down the broad disconnect between the stock market hitting new highs and the real economy.   Mr. Krugman said investor optimism about Big Tech’s profits would not go far, as people can’t survive on “rosy projections.”  He explained that on Tuesday, August 18th, the S&P 500 stock index hit a record high. And the very next day, Apple became the first U.S. company in history to be valued at more than $2 trillion. He said President Trump bragged that new highs of the stock market were proof that the economy is starting to recover from the Covid-19 pandemic; never mind that there have been 173,000 American that lost their lives.

Mr Krugman went on to say “but the economy probably doesn’t feel so great to the millions of workers who still haven’t gotten their jobs back and who have just seen their unemployment benefits slashed. The $600 a week supplemental benefit enacted in March has expired, and Trump’s purported replacement is basically a sick joke.”

He further explained that before the unemployment aid was cut off, some families were struggling with feeding their family, paying bills and it will probably continue to get worse with huge  wave of evictions, both because families are no longer getting the money they need to pay rent and because a temporary ban on evictions, like supplemental unemployment benefits, has just expired.  Although a new Trump order prompts CDC to ban coronavirus-related evictions through the end of 2020.  New filings for weekly jobless claims ending in August 29th, totaled 881,000 (compared to 950,000), which is better than expected as labor market continued its gradual recovery progress during the coronavirus pandemic recovery.

So Mr Krugman asks how can there be such a disconnect between rising stocks and growing misery?  Explaining that wall street traders who love to use the letter games for interpreting economic charts, are talking about a “K-shaped recovery”: rising stock valuations and individual wealth at the top, falling incomes and deepening pain at the bottom. But what is really happening here?

Mr Krugman first points out that “that the real economy, as opposed to the financial markets, is still in terrible shape.” The Federal Reserve Bank of New York’s weekly economic index suggests that the economy, although off its low point a few months ago, is still more deeply depressed than it was at any point during the recession that followed the 2008 financial crisis.

But compared to the financial housing crash in 08,  this time around the job losses are concentrated among lower-paid workers — that is, precisely those Americans without the financial resources to ride out these bad times.

So what about stocks?

The truth is that stock prices have never been closely tied to the state of the economy. As an old economists’ joke has it, the market has predicted nine of the last five recessions. Mr Krugman is not the only person to bring this up recently.  The Wall Street Journal recently noted, “Although the stock market has erased its losses suffered during the pandemic, the economy appears to be telling a different story.”  Neil Dutta, the Head of Economics at Renaissance Macro Research recently published an Op-ed in Business Insider titled “The ‘rising stocks are ignoring the terrible economy’ crowd is missing the clear reasons for the market’s surge”  Mr Dutta mentions that an  article six years ago from CNNBusiness asked, Why hasn’t Main Street recovered like Wall Street? And he replies because “the stock market is not the economy.” He says it is fair to say that the stock market and economy are looking at different things.

Mr Dutta mentions that most corporations that are traded in the equity market are in the business selling goods to other businesses and households.  On the other hand, the US economy has a lot of service sector activity that is not captured in the stock or equity market. Mr Dutta stated “a trip to the barber or dry cleaner is not something that registers in equities, but these people to people services make up a large chunk of US gross domestic product.”

However, this is quite different than saying the market is ignoring the economy completely, which is what many are doing today.

Mr Dutta points out that stocks tend to care less about whether the economy is “good” or “bad” in level terms, but do tend to care about where conditions are “better” or “worse.” This is one reason why stocks, a growth momentum variable, tend to slump in recessions and rise early on in recoveries even when unemployment is still elevated.  Here is a chart to explain further. 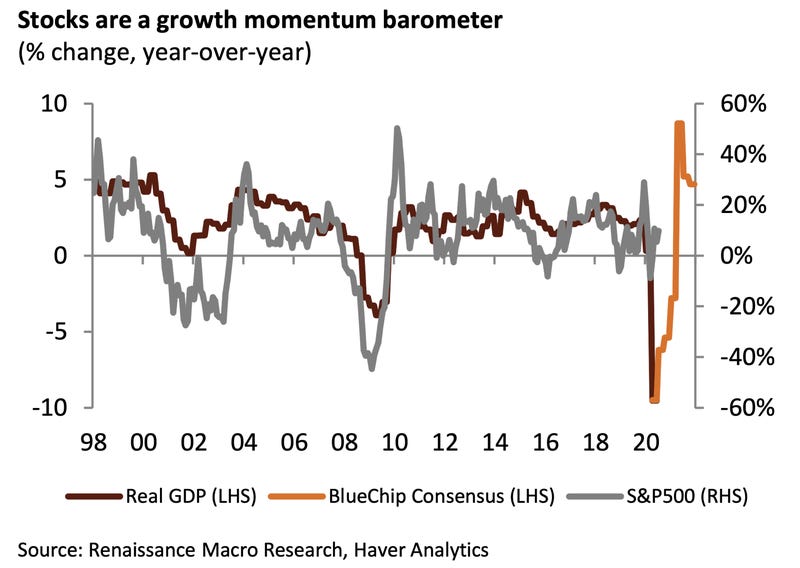 More recently, economic data has largely been coming in ahead of consensus estimates, why wouldn’t stocks rally in that case?

Importantly, it is pretty clear that the stock market is rewarding those firms doing well and punishing those firms doing poorly in today’s economy. This undercuts the idea that there is a large disconnect. Our nearby figure tells this tale. The figure plots the percent change since February of S&P 1500 sub-sectors against the comparable retail sales category. The results send a clear message: the market is not, not the economy either. 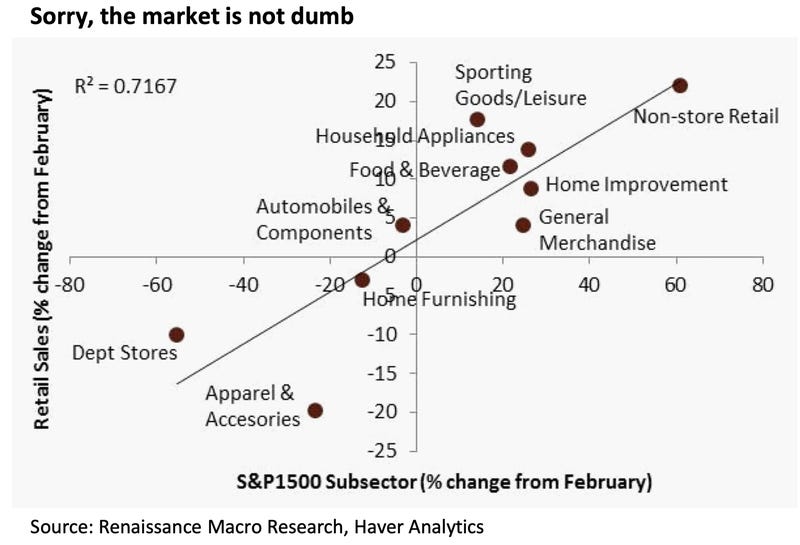 As an example, non-store retail spending has surged since February and so have share prices for internet and catalog retailer firms like Amazon. As people started fixing their homes while working from home, the home Home improvement store spending has advanced and so have prices for home improvement retailers such as Home Depot or Lowes.  Conversely, non essential department stores and clothing retailers have seen their sales tank with some even  filing for bankruptcy and store closures and the stock market reflects that.

Some sectors are seeing increased demand and others tanking during this Coronavirus pandemic. If you are concerned about people not making their rent? Well, residential REITS have seen share prices sink since March. Travel and tourism? It’s not as if airlines, hotels and cruise lines are leading this stock market recovery.  Mr Dutta’s final point was that in short, the stock market may not be the US economy, but it is not ignoring the US economy either.

It’s about investor perceptions of the fairly distant future

Another Business Insider Op-ed by Shalini Nagarajan wrote recently about Paul Krugmans article as well, mentions that Wall Street’s fixation on mega-cap tech stocks has pushed the weighting of the S&P 500’s 10 biggest components to record highs.  As of July 31, those companies — including Apple, Facebook, Amazon, Microsoft, and Alphabet — made up roughly

29% of the S&P 500, The Wall Street Journal reported, citing data from S&P Dow Jones Indices.  That represented the largest share in data going back 40 years, The Journal said. Mr Krugman explains that the recent rise in the market has been largely driven by a small number of these technology giants. And the market values of these companies have very little to do with their current profits, let alone the state of the economy in general. Instead, they’re all about investor perceptions of the fairly distant future.  Apple holds the greatest weight in the index, roughly 6.5%. A week and ½ ago, the tech giant became the first US-listed company to hit a $2 trillion market capitalization.  Shalini Nagarajan points out that Mr Krugman used Apple’s $2 trillion market valuation as an example, where he said that as long as investors expect the tech giant to generate profits in the coming years, they “barely care” about the US economy’s near-term prospects.   To dive in more specifically.  Krugman said that the market values of tech companies had little to do with their profitability or the economy. “Instead,” he said, “they’re all about investor perceptions of the fairly distant future.”

Apple’s price-to-earnings ratio stands at about 33, suggesting that only about 3% of the value investors place on the company reflects the money they expect it to generate over the next year, Krugman said.

“The profits people expect Apple to make years from now loom especially large because, after all, where else are they going to put their money?” Mr Krugman wrote. “Yields on U.S. government bonds, for example, are well below the expected rate of inflation.”   Mr Krugman said that Americans could retrieve only minimal income from capital gains and could not survive on “rosy projections.”

“Unfortunately, ordinary Americans get very little of their income from capital gains, and can’t live on rosy projections about their future prospects,” he said.

On August 25th, the NYU Professor of Marketing, Scott Galloway spoke to Yahoo News about the stock market and specifically the Dow.  He talked a little about some of the companies listed in it but then he went to say “I would argue that the Dow is one of the most dangerous numbers ever manufactured because it creates this delusion of prosperity and that all is fine.”  If you were to say how is the health of our commonwealth or the health of our economy? You would not guess that the Dow is at an all time high. He said “Unfortunately, I think this index has gone from something that represents America (which it does not)… [to] something that’s really just a proxy on the economic well being of the top ten percent and spoiler alert they are killing it.” He feels it is totally disarticulated from the underlying economy or the health of our nation.  Clearly there are real winners and losers emerging during this pandemic where some companies and sectors are prospering and others are struggling. One NYT reader left a comment saying “the FAANG stock valuations are based on future prospects as Mr. Krugman states. It has nothing to do with underlying economic activity. We may just be entering a phase where valuations will continue to skyrocket as long as future prospects for companies catering to the ‘haves’ look good (which then will also ensure a captive market for those companies).

For the ‘have nots’, a prayer would be a good idea.