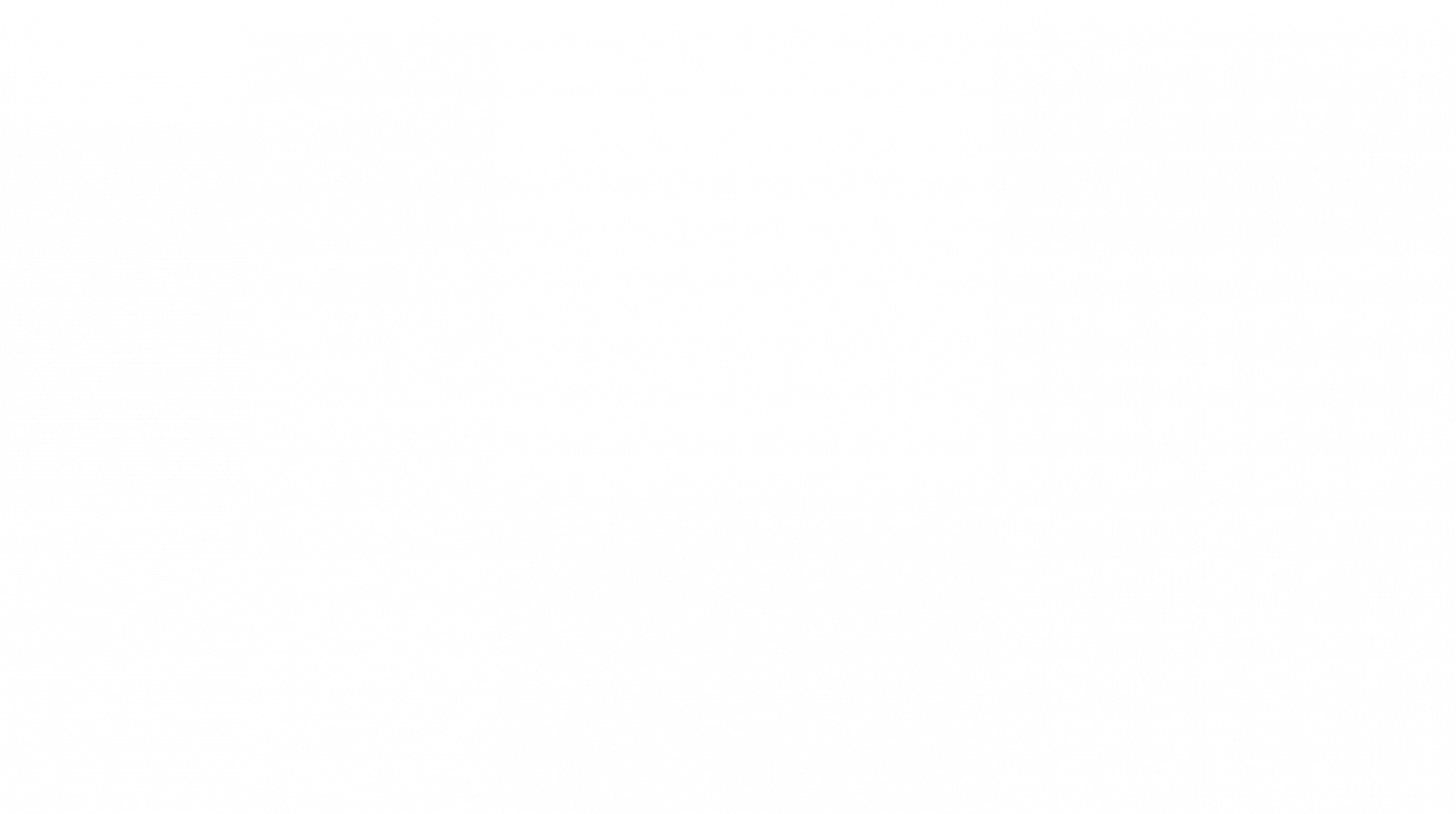 How is the US economic recovery going? – Bloomberg offers 5 charts that show it maybe slowing

According to recent reporting from Bloomberg on July 11th, 2020, the U.S. reopening and economic recovery from the Coronavirus-induced recession is leveling off and showing signs of hitting some snags or slowing down being only two months into the rebound. The article is basing this assumption off of a series real-time economic indicator charts.  Now there has been some positive economic data that has come out recently which includes the surprising employment numbers released from June showing a gain of 4.8 million new jobs were added. Unfortunately according to Bloomberg, there are trends that are starting to contradict those improvements suggesting those gains maybe flattening or going down.

A lot of this can be attributed to the recent resurgence of Covid-19 cases rising across the states of California, Arizona, Texas, Florida, and Georgia which are now forcing some state governors to pull back the reopening phases especially businesses that consist of indoor activities such as restaurants, movie theaters, fitness gyms, museums, salons, malls and church services. Some maybe allowed to do if they can outdoors.

Bars must close ALL operations.

This caused officials from the Federal Reserve which included Atlanta Fed President Raphael Bostic and Cleveland Fed’s Loretta Mester to make statements warning that an uptick in the spread of the virus poses new risks. Mr Bostic said “People are getting nervous again”.

According to recent economic data from five private and government sources Neil Dutta, head of economics at Renaissance Macro Research told Bloomberg that “the summer pause isn’t likely to be an extended slump, but rather suggests a ‘stair-step’ recovery with pullbacks along the way”.  Now each part of the country might be  in different phases and circumstances as far as dealing with the virus and its economic activity, but here are 5 economic indicator charts that show the recovery may be faltering a bit.

The Atlanta Fed chairman cited data from Homebase, a scheduling and timesheets software company that provides real time data reports, which are starting to show a stagnation on the number of businesses that are opening and having employees working.  And this is more true for the states that has seen recent spikes in Covid-19 cases such as Florida and Texas.  Homebase, the free scheduling tool used by 60,000 U.S. businesses and a million hourly employees, had shown the labor market gradually improving from mid May to mid-June. 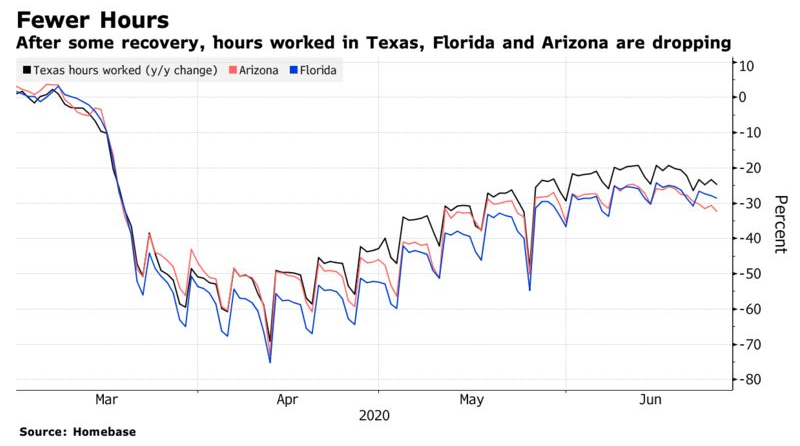 The Dallas Fed publishes a real-time survey of the population to gauge the percentage of Americans who are working, using Current Population Survey data. The ? The good news? The percent figure rebounded in May but recently started to level off. 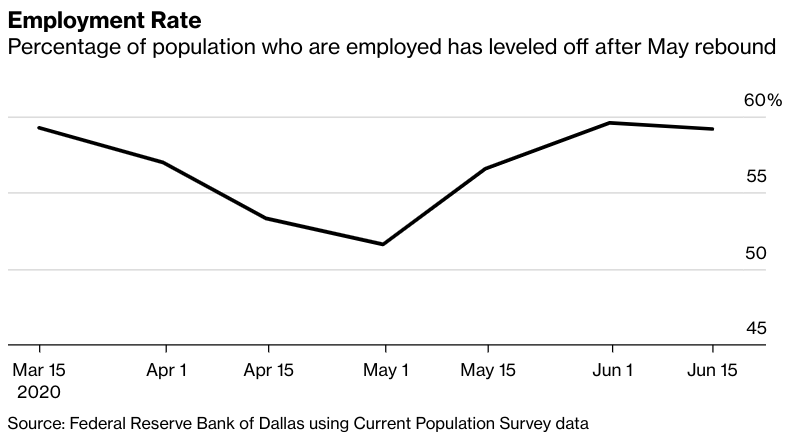 Restaurants and bars across the U.S. had been ordered to shut down in mid March in response to flattening the curve, government lockdowns and consumers staying home as the virus spread. Restaurant reservations on OpenTable, an online service, showed a pickup in May and the first half of June, followed by a drop during the last few weeks, reported by CNBC.  The decline has been especially marked in places with rising cases, though it’s happened in other states as well. 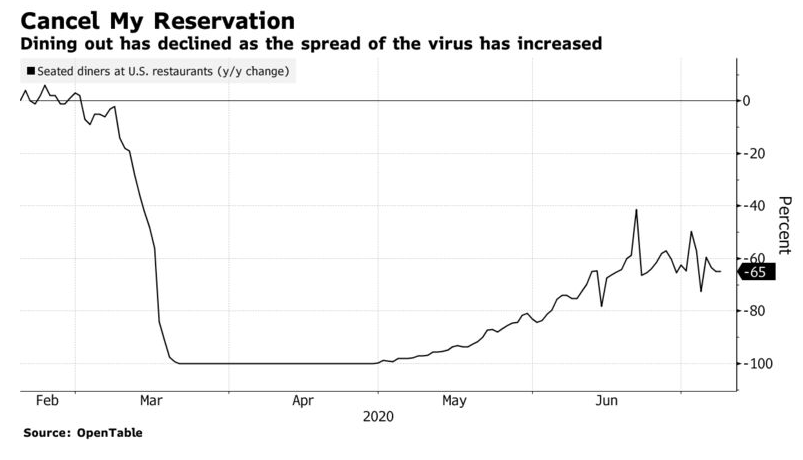 According to Bloomberg, The New York Fed launched a weekly economic index in April to give a more timely measure of the economy during the Covid-19 crisis. The components include measures for same-store retail sales, consumer sentiment, initial unemployment-insurance claims and steel production, among others. The charts showed a big rebound in May and early June, but Neil Dutta includes this index among the indicators that things are getting worse. 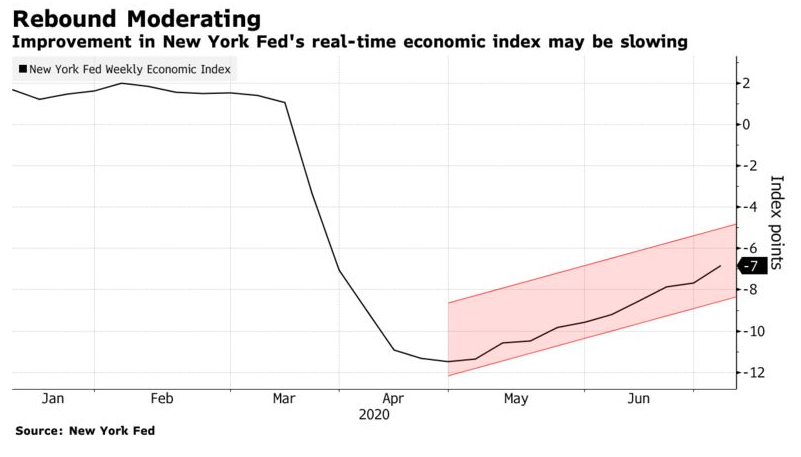 U.S. homeowners are still under continued pressure and there are signs things could get worse, according to the U.S. Census Bureau’s Household Pulse Survey. Nearly one in 10 households ( 8.3 million out of 87 million) with a mortgage failed to make their last payment and 16% of the survey respondents said they fear they can’t cover the next one, according to the U.S. Census survey in data collected in late June. 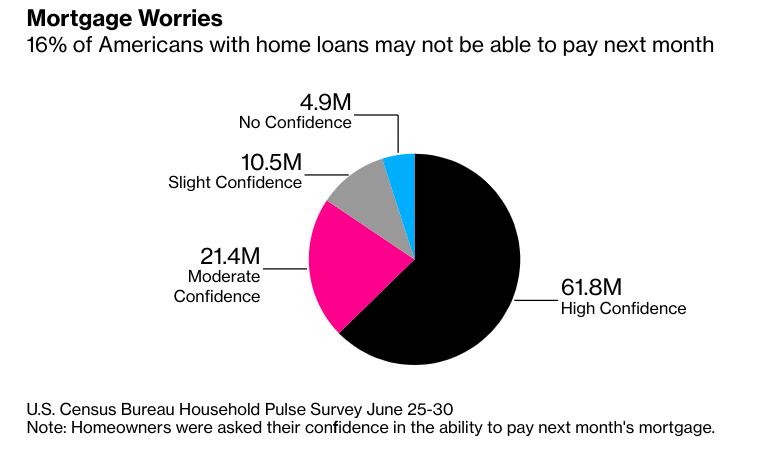 G.D.P. grew in the fourth quarter of 2020 at an 4.0% annualized rate but isn’t back to pre-pandemic levelseconomy